This past September, 2021, the Saukville Historical Society was contacted by Sonny Ver of Belgium, inquiring about a man named Albert Plesec.  As a child, Sonny’s Grandmother told him the story of the day her village was liberated by the Americans during WWII, and of a soldier who hugged her and gave her a piece of chocolate.  Unfortunately, the soldier was killed in an accident the very next day.

As an adult, Sonny became passionate about WWII and is a member of the group “Les jeunes du B40” (the young people of B40), who research and reenact the liberation of their villages and care for the graves of the American GI’s who are laid to rest there.  He began to research this soldier his Grandmother told him about and discovered that he came from Saukville.

CPL. ALBERT P. PLESEC CO.F 32ND ARMORED REG. 3RD ARMORED DIV.
Service Number: 36231829
*Originally written in French by Sonny Ver and translated to English; edited by Mary Boyle.
Albert was born September 3, 1915, in Milwaukee, Wisconsin. Son of an Austrian immigrant father who arrived in the USA on March 22, 1904, in New York and naturalized in 1932, and of a Yugoslavian immigrant mother. In the 1930’s, they lived in the small village of Saukville in Ozaukee County, Wisconsin (approximately 800 inhabitants). His siblings consisted of a brother, Frank, four years older than him, and a little sister, Vera, born in 1917. In 1937, his father Jacob was hit by a car and died there.
On January 13, 1942, after the attack on Pearl Harbor, while working as a mechanic with A. O. Smith Corp in Milwaukee, Albert decided to join the US ARMY with the armored troops. His brother enlisted on November 24 of the same year with the parachute troops of the 327TH Glider Infantry Regiment of the 101st Airborne. On November 28, 1942, he married Joyce Westfall. Three days later, he returned to Camp Pickett in Virginia within his unit, Company F of the 32nd Armored Regiment.
On September 5, 1943, Albert and his regiment sailed for England at Codfort in Wiltshire. In January 1944, he sent his family a photo of himself dressed in Scottish (it was quite common for GI’s to send this kind of souvenir photo), which was printed in the Ozaukee Press.
On June 23, 1944, he set foot on Norman soil at Omaha Beach. On June 25, the men of the 32nd regiment had their baptism of fire. The Battle of Normandy will rage on both sides until August 21. Then the chase begins to the Belgian border, “the battle of Mons”.  On September 3, 2nd Lieutenant Chester H. Jordan of Company K of the 47th Infantry Regiment received the order to take the town of Binche with the Shermans of Company F of the 32nd Armored Regiment, where Corporal Albert P. Plesec served as a tank gunner. Approaching the small medieval town, the Germans are forced to abandon one of their tanks and fall back. After a cautious advance, the entire Binchois population was waiting for them in the center to cheer them on. It was party time in Binche! The soldiers were covered with flowers and offered bottles of wine and beer. Lieutenant Jordan will write that upon their arrival in the city, one of their trucks was loaded with more than 150 bottles of wine that were offered to them. The lieutenant who commands the entire detachment positions the tanks on the main roads of the city in order to create roadblocks. Albert and his crew are sent to the border of the small neighboring village, Epinois. There, a few exchanges of fire with a German tank which folds up at a place called “la cote de Mouscou” in Leval (chemin Boussart), reason. The Sherman will position itself at the entrance to what is now Rue des Sinistrés in Mons, Belgium. Albert and one of the team members will walk to the neighboring village, Ressaix. It is at the current “rue du Masy” in Ressaix that he will take my grandmother in his arms and offer her a piece of chocolate.
The next day, September 4, Corporal Plesec performs maintenance on the tank gun. When handling this, the gun accidentally fired and the recoil of the breech will strike the right side of his head. The anti-tank round will pass through a house with no casualties. Immediately after the incident, he was taken by his fighting comrades to Saint-Pierre Hospital in Binche. On his arrival, it is unfortunately too late. The corporal succumbed to his injuries the day after his 29th birthday. Sister Thérèse of the Child Jesus gave his companions his personal effects, namely: a watch, his wedding ring and his dog tags.
On September 7, he will be buried with honors by the Binchois, who also mourn seven supporters of the B40 killed in action a few days earlier in Waudrez. Albert will be buried in a waiting vault in the Binche communal cemetery.
On October 4, in Saukville, Wisconsin, his mother received her missing notice. Albert was officially declared KIA (killed in action) in February 1945, but his body was reported missing for the US Army.
It was only at the end of March, 1946, that the US military came to investigate and recover his remains at the Binche cemetery. His body was transferred to the laboratory/military cemetery in Neuville en Condroz, where it will first be considered unknown X-3185 (since he no longer had his dog tags) before being formally identified. He still rests in this cemetery (Plot A, row 13, grave 20).
Albert’s wife, Joyce, remarried Cliff Learned in 1946 and they had three children: Fritz, Michael and John. Albert’s mother died in 1947 without having been able to complete the formalities for the repatriation of her son. His brother, Frank, was seriously injured in the head by shrapnel, causing severe brain damage, and died in 1967 without having any children. His sister Vera lived her entire life in Saukville, where she and her husband, Roy, ran Roy & Vera’s Tavern for more than fifty years.  Vera passed away in 1999; her and Roy also had no children.
His name was forgotten with us until 2021, but it will no longer be forgotten! We (Les jeunes du B40) would like to erect a stele in Albert’s honor; if you would like to make a donation to this effort, you may do so at this link: https://www.leetchi.com/c/memorial-albert-p-plesec…
###
The website at the link is the European version of a “Go Fund Me” and you should see a window pop up at the top which will allow you to translate to English.  Donations may also be made to the Saukville Historical Society through March 18th, and we will make a donation in your name to the memorial.  Checks may be sent to:
Saukville Historical Society
PO Box 80015
Saukville, WI 53080
Please make the check to Saukville Historical Society and write “Plesec Memorial” in the memo.

The SHS acquired the old 1912 Saukville Firehouse Station from the Village of Saukville on December 30, 1998 with the intention to convert it into the Crossroads Museum and home to SHS. Exterior photographs are now available in the photo album.

As part of the German Tour I, Saukville is the oldest, European-settled community in Ozaukee County. As early as 1679, French Voyageurs established trading settlements and, by 1837, immigrant settlers operated business establishments here.

In 1991, the Payne Hotel was placed on the National Register of Historic Places. The Hotel, located at the intersection of the historic Dekora Military Road and the old Green Bay Trail, was built in 1848 by the founder of Saukville, William Payne. 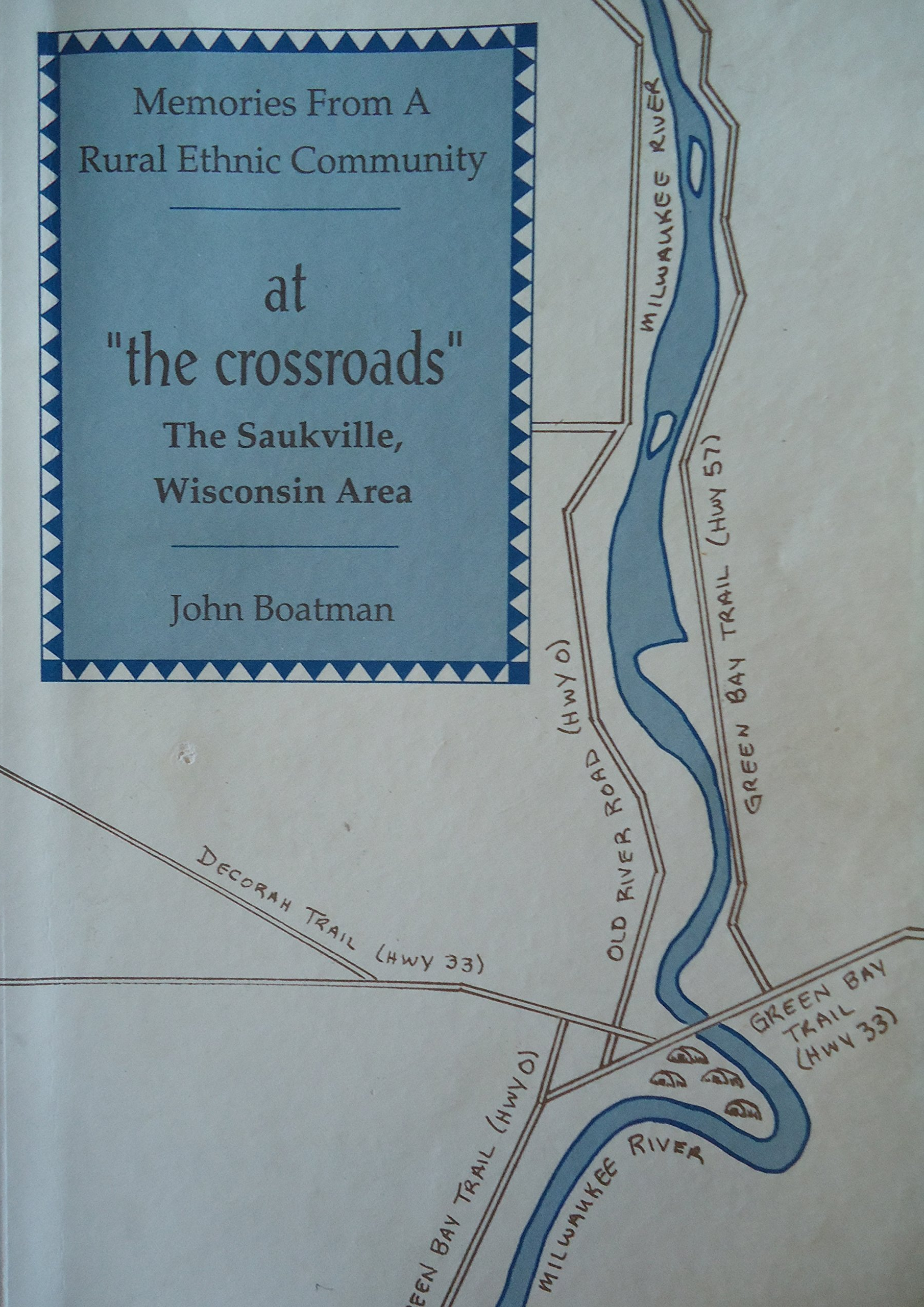 The historical development of the area has been researched and was published in 1993 in a book by John Boatman, professor of American Indian and Ethnic Studies at The University of Wisconsin – Milwaukee. The book is over 600 pages long and contains information about Saukville from the early 1600’s to the late 1960’s.

In 2002, a new history book was published. This new book had been in the making for years by brothers James and John Peterson of Saukville. The book contains a pictorial history of Saukville from photos collected by the brothers and others lent to the brothers for the book.